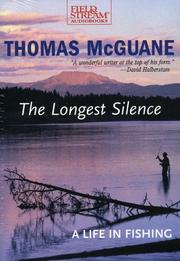 The Longest Silence A Life In Fishing by Thomas McGuane

From the highly acclaimed author of Ninety-two in the Shade and Cloudbursts comes a collection of alternately playful and exquisite essays borne of a lifetime spent fishing. The forty pieces in The Longest Silence —including seven collected here for the first time—take the reader from the tarpon of Florida to the salmon of Iceland, 5/5(1). The Longest Silence is masterful. The story begins when two innocent college girls go missing at the same time? One of the mothers calls in her brother, who is an ex-FBI agent coming to terms with his past. As his investigation begins, he is drawn into a deeper, darker, more compelling story/5(79). The LONGEST SILENCE is the latest installment to the SHADES OF DEATH Series and it doesnt disappoint. A taunt thriller that will keep you riveted until the end and will keep you thinking about it, long after the final page has been turned/5.   Debra Webb is my go to for creepy suspense, serial killer novels. Her latest, The Longest Silence is no exception. While it is part of the Shades of Death world, the focus is Brand: MIRA Books.

The thirty-three essays in The Longest Silence take us from the tarpon of Florida to the salmon of Iceland, from the bonefish of Mexico to the trout of Montana. They bring us characters as varied as a highly literate Canadian frontiersman and a devoutly Mormon river guide and address issues ranging from the esoteric art of tying flies to the Author: Thomas Mcguane. The Longest Silence: A Life in Fishing by McGuane, Thomas and a great selection of related books, art and collectibles available now at About The Longest Silence With ten books over a thirty-year span, Thomas McGuane has proven himself over and over again "a virtuoso a writer of the first magnitude," as Jonathan Yardley wrote in the New York Times Book Review.   -RT Book Reviews on The Longest Silence "This psychological thriller is rife with tension that begins on page one and doesn't let up. It's a race against the clock that had me whispering to the pair of flawed, desperate protagonists 'Hurry, hurry.' A gripping read." -#1 New York Times bestselling author Sandra Brown on The Longest Silence/5(31).